According to the Livestrong website, when you play kickball for an hour you can burn up to 460 calories per hour. This sport is one we remember from our elementary school days. Hopefully for you it is a good and happy memory, not one of being the last to be picked 😦 Well this sport isn’t just for kids anymore.

The adult kickball craz has swept the nation, including right here in Virginia Beach. Chances are you probably know someone right now that plays in one of the many leagues. You may even play yourself. These leagues are comprised of organized teams with all different skill levels. There are the recreational players and then there are the more competitive. Some leagues even partake in some icy cold beverages during their games. I’m not sure if those teams are getting quite the same calorie burn. Nevertheless they are still blowing off some steam, getting some physical activity, and having fun.

WAAR, or World Association of Adult Recreation is a great organization offering several adult sport leagues. I played in the WAAR league for several seasons so of course I think this league is the best! During my time with WAAR, we played weekly at Fort Story. We had a spring and a fall season. I was a member of a more competitive team. My team was made up of some great people and we all looked forward to our weekly Thursday night game. Sometimes we even had team dinners and outings just as you may have done if you ever played high school sports. In edition to playing for a team, I also was on the board for several seasons and oversaw the rules and regulations. Yes… Rules! Each league has their own set of rules they are followed closely. Rules or not, kickball is a great way to get some extra physical activity into your weekly schedule. Whether you are a top athlete or just there for fun, you will be glad you decided to join…no matter what league or team you chose!

Last week I was reminded of just how fun my kickball days were. Our company participated in a corporate sand kickball tournament. Our team was made up of people from all different departments. It was a great chance to interact with my coworkers outside of work! It was an amazing way to spend a Friday afternoon…on the beach and in the sun! It was a great Friday afternoon workout, running in the sand can be tough.

I encourage you to look into the leagues below and consider if this fun sport is right for you! 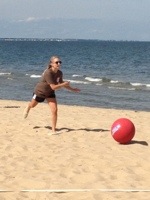 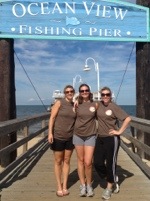